Gene is on a conference call in the next room and I just heard him say, in a completely serious tone, “Oh, I just let stars tell me what to pay attention to.”

I’m sure that “stars” is actually some kind of acronym for a task-management program but in my over-active imagination Gene has a secret life as an astrology nut.

“You’re so lucky you don’t have to wear makeup,” my hairdresser told me.

“It must be great,” she said. “Now me, when I go swimming my whole face comes off.”

Me: “Nah, I think the worst thing you can say to Jonathan Franzen is ‘Oh, hi! I thought Infinite Jest was great.'”

Step one: Find a hairstylist you really like who gives you the most flattering haircut you’ve had in several years. My face looks weird here but my hair is flawless. So bouncy!

Step three: Learn that the salon has burned down.

Step five: Learn that the salon has re-opened.

Step seven: Receive a call the next day learning that she’s just quit her job.

Note: I’m only on Step Eight, and we have a lot of beer in the house so I’ll probably pass out before I get to Step Ten. Nobody panic. Or panic a little I guess, because passing out from beer is not so great either. Well, maybe I’ll just stop on Step Eight.

Didofoot: If I showed you the pile of dust I just removed from the bedroom

Didofoot: and then you would scream

Didofoot: and then you would throw up

Didofoot: and then you would leave me

Didofoot: Also I stuck googly eyes on the dust so that we can finally have a pet to love.

Didofoot: It’s your turn to walk the dust, by the way.

A trip to the seaside

On a recent visit to a lighthouse, Michele and I came across a series of these signs. They posed a bunch of whale-related questions without answering any of them. 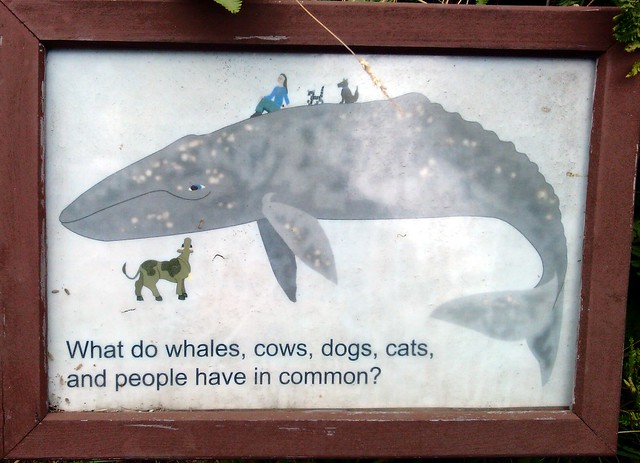 “I know this one!” Michele said, all excited. “It’s babies. They all have babies outside their bodies!”

“Ew, what? I don’t have a baby on the outside of my body!” I peered at her carefully. “Where do you keep yours?”

Kris: “My piano teacher gave me the same song for homework for the third week in a row. I do not understand this song. It makes no sense to me. I can’t learn it. Why can’t I just move on from this song?”

Kris: “That occurred to me. But if this song is my training exercise, why does she keep making me wax her car?”

You know how sometimes another driver will come this close to hitting you, or you’ll just barely avoid tripping as you go down the stairs? Not often — you don’t have a close shave every day — but just now and then? And it’s such a close call that you can actually feel another timeline branching away from that moment, so now there is the timeline you’re in where you had a narrow escape and then there’s the other timeline where you did get hit or fall down. And you feel, not relief, but this huge stab of guilt, because you go off whistling and that other you is lying in a heap somewhere feeling very poorly indeed.

I’m not sure where I’m going with this except maybe I need to watch fewer sci-fi movies.

Rachel: “Wait, how fancy is this dinner place? I didn’t bring fancy clothes.”

Kris: “Ha! Oh, no dude, this is Santa Cruz. Believe me, you will be the best-dressed person in this restaurant.”

Jason: “Yeah, you know how at some restaurants they give you a coat and tie to wear if you don’t have them? At this place they give you one of those knitted dreadlocks caps.”