This year we hosted my parents for Christmas dinner. My mom is a Harry Potter nut, I’m quite fond of the books, and my dad has read them all and knows them pretty well, so I decided to have a Harry Potter-themed Christmas this year. (Gene had never read any of them but I was quite happy to explain everything to him, and since everyone loves long explanations about books they haven’t read this promised to be a great Christmas for everyone.)

I started by sending everyone their invitations to attend the special one-day-long Christmas term at Hogwarts (all images can be clicked to enlarge): 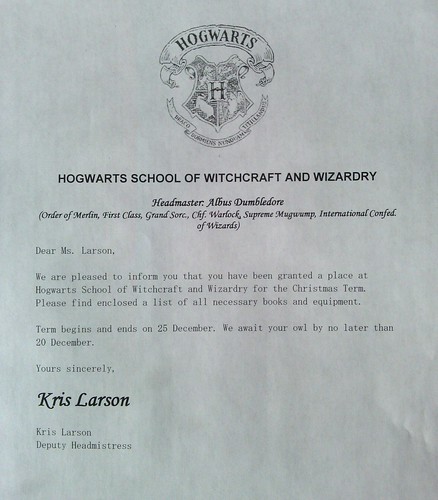 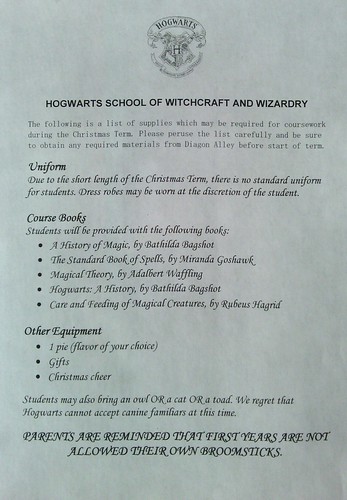 Their invitations included an RSVP card in a separate stamped envelope: 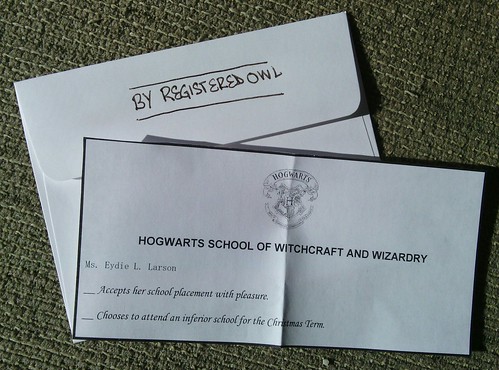 Then it was time to make our house into Hogwarts.

I made a Platform 9 3/4 sign out of a small chalkboard I had lying around (I dunno, I have weird stuff lying around — guys, I live in a magical boarding school! Don’t judge me). I meant to put it outside but I forgot and had it just inside the door. Probably just as well since I wouldn’t want anyone trying to magically crash through my door. 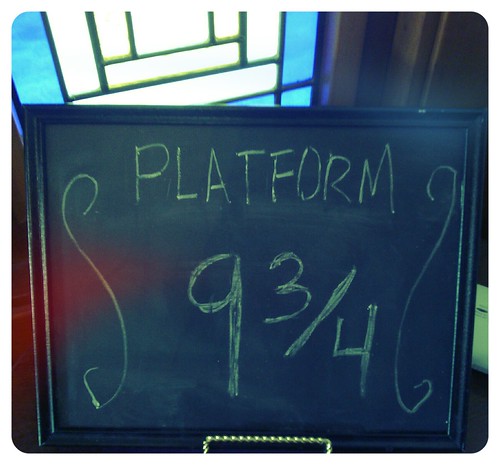 We have a closet under our staircase which is just about the size of the one where Harry lived with the Dursleys, so the year we moved in my mom gave us this sign for it: 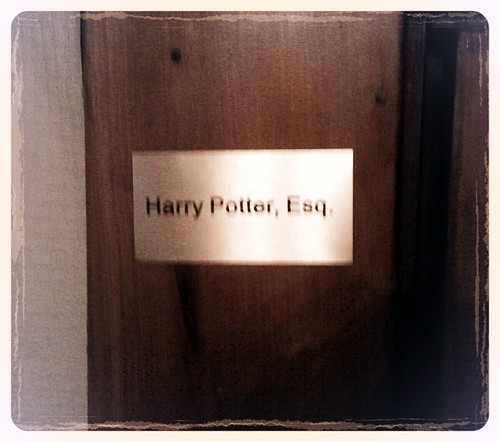 On Christmas day I had a pile of Harry’s luggage waiting just outside the closet: a bag, Harry’s stocking, and a book about owls that I decided Ron gave him for Christmas: 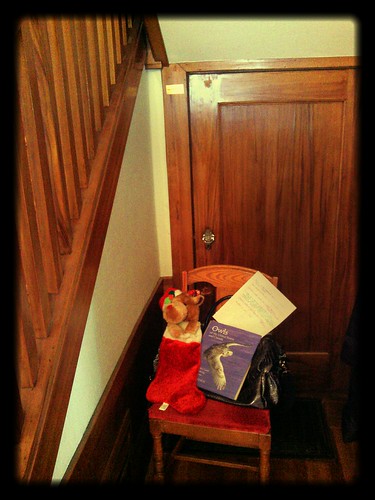 There was also a note: 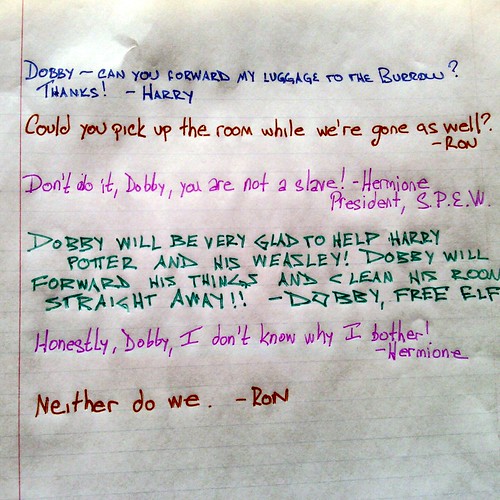 In case you can’t read it (because I tried to write in four different handwritings and I can barely manage one), it says:

“Dobby — can you forward my luggage to the Burrow? Thanks! -Harry”

“Could you pick up the room while we’re gone as well? -Ron”

“Dobby will be very glad to help Harry Potter and his Weasley! Dobby will forward his things and clean his room straight away! -Dobby, Free Elf”

“Honestly, Dobby, I don’t know why I bother! -Hermione”

I will admit there are some problems with this. I mean, the closet is at the Dursleys’ house but we’re supposed to be at Hogwarts, so what’s going on here? I puzzled over this for a while, then decided it was some magical nonsense and why are you questioning my Harry Potter Christmas anyway? Throw your own children’s book themed Christmas, why don’t you.

Okay, on with the decorations. By the fireplace I had some floo powder: 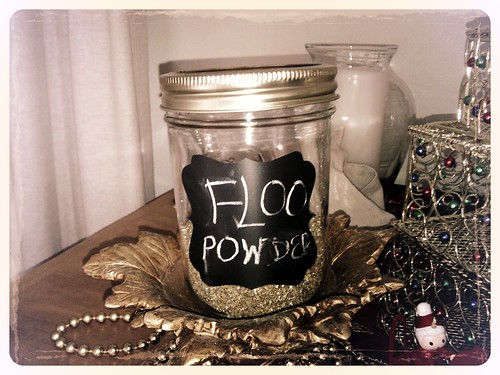 Then on to the Great Hall (really my dining room) where I had some stuff sitting on our built-ins. I had considered trying to hang a bunch of stars all over the ceiling but decided this would be too much work, so I got a little tree instead and decorated that with stars that I painted and glittered: 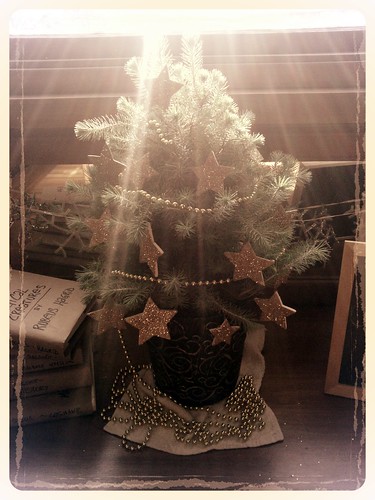 I promised my students that textbooks would be available for their use, so I put some brown paper covers on books and wrote out titles. All the books are textbooks that the Hogwarts students actually use, except Hogwarts: A History, which is Hermione’s favorite extra-curricular reading, and Care and Feeding of Magical Creatures by Rubeus Hagrid. I felt like Hagrid might have gotten to write a book after all the adventures were over, so I added it: 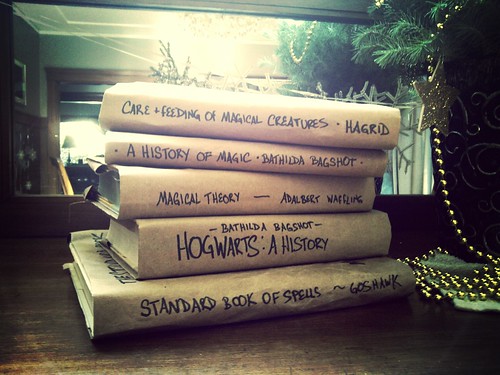 Then of course you have to have the Sorting Hat. People online seem to like using battered old hats for their Harry Potter parties but I thought the hat might have dressed up a bit for Christmas. I wanted to have some kind of recording I could play when people tried it on that would yell “GRIFFINDOR!” because I am insane, but I decided not to do that, because I am not that insane: 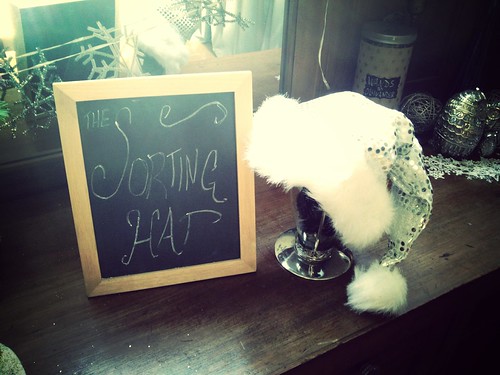 And here we have some owls, resting after a postal delivery, and some chocolate-covered pretzel “wands” by Ollivander: 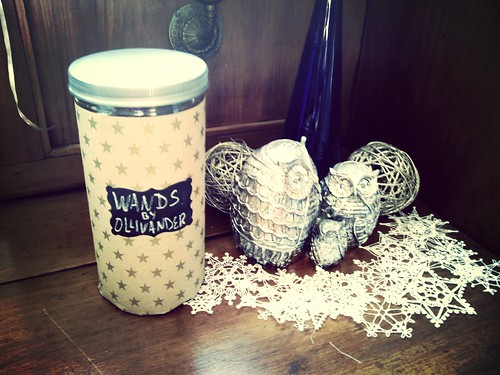 Then we have the Marauder’s Map, which is a terrible photo, sorry. We have the blueprints of our house framed on the wall of our dining room so it was very easy to add colored dots and names and pretend that the map was showing the location of various characters. I have Dumbledore and Snape wandering around and all three kids (Harry, Ron and Hermione) in the closet, where I claimed they were hiding under the invisibility cloak because they were up to something. The text on the map says “Marauder’s Map: I solemnly swear I am up to no good.” 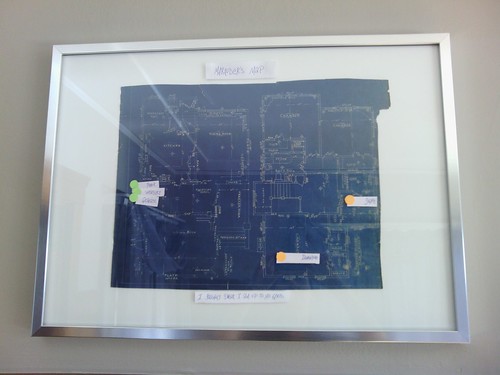 After I forced everyone to admire the decorations, we moved on to the gift exchange which was well-lubricated by butterbeer (which was just beer), and pumpkin juice (which was white wine, but which my mom also chose to call butterbeer because she preferred that name — and hey, who am I to mess with someone’s imaginary name for their real drink?). The gifts were just normal things except that I did give my mom a pair of socks with a note that said “MASTER HAS GIVEN DOBBY A SOCK!!!”

After this it was time for dinner. I was going to have all kinds of clever Harry Potter-themed dishes (like Bertie Bott’s Every Flavor Green Beans, stuff like that) but I kind of ran out of steam so we just had a normal dinner.

After dinner I presented everyone with chocolate frogs. I found a frog candy mold on Amazon (which was great, by the way — the chocolate actually popped right out when it was hardened, which every mold claims to do and few molds actually do) and I made chocolate frogs filled with peanut butter (caramel would also be good, I think). I added personalized Chocolate Frog Trading Cards that I made online which listed each of our wizarding names and accomplishments and famous quotes. For example, here’s Gene’s: The font is kind of terrible. In case you can’t read it, it says “Eugene ‘Machine’ Wood: The Mechanic. The Muggle-born ‘Machine’ Wood is known as The Mechanic for his ingenious combinations of magic and Muggle technology. This has made him an invaluable employee in the newly formed Use of Muggle Artifacts Department at the Ministry of Magic. Most Famous Quote: ‘I don’t believe in magic, I just believe in me.'”

I also used these kits to make my own Christmas crackers, which was pretty fun because I got to pick out my own toys and stuff. I included dumb Harry Potter jokes in each cracker, like “Where do you find Dumbledore’s Army? In his sleevey!”

Annnd that was pretty much it. I’m not a crazed Harry Potter fan so I’m not really sure why I decided I needed to go insane with it this year. Though actually I don’t think you’re officially insane until you buy a $250 “enchanted” moving chess set. Well, maybe next year.

Posted under Uncategorized and tagged with Family, Reading, The House
Comments (5)