This weekend seven of us went to Angel Island to celebrate the lump of birthdays that occur in October and early November (Erica, Jacob, me, Jason).

As if I had not grown up in the Bay Area or had not lived in San Francisco for nearly a decade, I chose to wear only a tank top and sweatshirt, instead of bringing the proper gear (a tank top under a long-sleeved tee under a sweater under a sweatshirt under a parka, plus a hat). Happily, I realized my mistake before we got on the ferry to Angel Island, so I dashed to the nearest of millions of gift shops that exclusively sell cold-weather gear to idiot tourists who under-prepare. Like me.

Grabbing the first sweatshirt and hat I saw, I paid the clerk in cash and was frantically scrambling into my life-saving clothes when she stopped me. “This twenty is counterfeit,” she said.

“It is?” I said, staring. I’d never seen counterfeit money before. It looked totally normal to me. “How can you tell?”

“It’s different,” she said, crumpling it in her fist as if to show me. Real money would never crumple this way, she seemed to say. Try doing this to a gold doubloon — you’ll see!

“Where did you get it?” she said. I looked at her blankly

“It’s a twenty,” I said. “I expect I got it out of an ATM. Or…I mean, Jesus, who knows where money comes from? Can I have it back?” She handed it over, trading me for another, apparently non-counterfeit twenty.

“You can try it at other stores,” she said, “but if no one takes it, you should take it to the bank.”

“Um…if it’s counterfeit, I’m not going to try and pass it off to other people,” I said.

I took it back to Gene, who had given it to me (yes, of course I knew where I had gotten it — I get all my cash from Gene, because I’m too lazy to ever go to an ATM), and told him what the lady had said.

“That explains why she told me her manager had gotten three of these already,” I said.

Anyway, if you want to make some quick cash, I suggest you go to this gift shop and tell the lady you’re the representative of the U.S. Treasury, here to collect any counterfeit bills she may have stored. Something tells me she’ll believe you.

Meanwhile, here are some photos of law-abiding people enjoying lawful entertainment at the Ellis Island of the West. Enjoy! 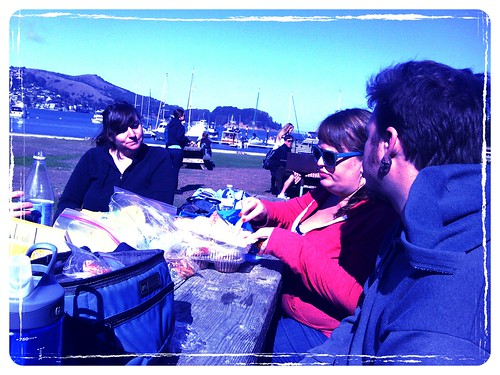